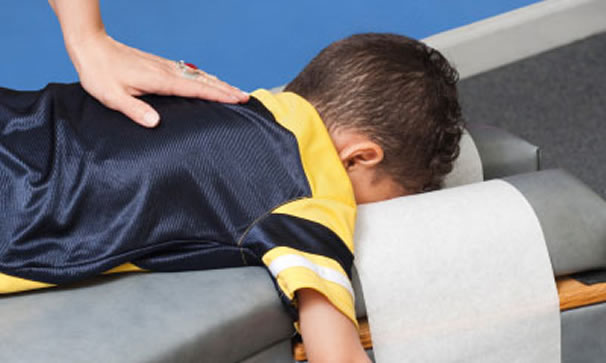 Children have been treated by chiropractors for spinal problems ever since chiropractic was founded in 1895, and neck pain is no exception. Neck pain is surprisingly common in kids, though not quite as common as it is in adults, reaching a similar occurrence rate by age 18. Studies conducted in the United States and in other countries report similar findings, leaving one to conclude there is a high prevalence of neck pain in kids all over the world. There are many causes of neck pain with a few being unique to children and some that could be a warning sign of something dangerous, such as meningitis. But far more commonly, neck pain in kids is NOT dangerous. Let’s take a look!

Looking at neck and shoulder pain in high-school-aged students, 931 males between 16 and 19 years of age were surveyed. More than two out of five students (44.3%) had recurrent neck and shoulder pain more than once a week with an overall prevalence of 79.1%. THAT’S A LOT! The study reported the student’s average sitting time was 10.2 hours a day, 59% did NOT sit up straight, and 11.9% reported that they stretched their neck and shoulders regularly throughout the day. Students with recurrent neck and shoulder pain also reported frequent fatigue and depressed moods. Looking specifically at 1,122 backpack-using adolescents, 74.4% were classified as having back or neck pain. When compared to non- or low use backpackers, there was nearly a two times greater likelihood of having back/neck pain! Also, females and those with a large body mass index (overweight) were also significantly associated with back/neck pain. Lastly, they found when compared to adolescents with no back/neck pain, those with pain carried significantly heavier backpacks.

Another common cause of neck pain in adolescents is a condition called torticollisor, “wry neck.” This is basically a muscle spasm of certain neck muscles that rotate and extend the head from the neutral / normal position, often described as being “stuck” in this position. Though there are several types of torticollis, it can be triggered by almost anything including a change in weather, sleeping in a draft, following an infection like a cold or flu, maintaining a faulty prolonged posture, certain types of medications, and many others. Some studies describe torticollis as usually improving within one to four weeks, but in the hands of a chiropractor, it usually takes two to three days for the acute pain to subside and one week to completely finish the job! Of course, this varies depending on the case. Infants can be born with “congenital torticollis,” which occurs in 0.3 to 2.0% of newborns. Here too, chiropractic is VERY effective.

We realize you have a choice in whom you consider for your health care provision and we sincerely appreciate your trust in choosing our service for those needs.  If you, a friend, or family member requires care for neck pain, we would be honored to render our services.