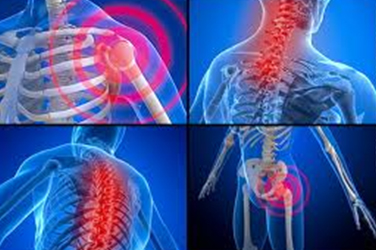 Fibromyalgia (FM) is one of the most common types of chronic pain disorders with an estimated five million sufferers in the United States alone. A “hallmark” of FM is the difficulty its sufferers have in describing their symptoms. When asked, “…what type of pain do you feel?,” the response is often delivered with uncertainty such as, “…it’s kind of achy but sometimes gripping…it makes me stop what I’m doing sometimes for only a second or two, but othertimes, I have to sit or lay down until it passes.” It’s sometimes referred to as “deep inside” or radiating, shooting, tender, pins and needles, and locating the pain is another big challenge. It’s often a “generalized” deep ache that includes multiple body areas, sometimes all at once. At other times, it’s spotty and moves around. It’s typically NOT restricted to one side of the body but rather on both sides. It is these inconsistencies that makes diagnosing FM so challenging, sometimes to the point where it can literally takeYEARS before a patient is diagnosed. One study reported that of the 92% FM sufferers who had discussed their complaints with a primary care doctor, only 24% lead to the diagnosis of FM! It is often asked what makes FM so difficult to diagnose and the answer is simply, “…we can’t see it,” and, there are no definitive diagnostics like a blood test, an x-ray, or even more sophisticated tests that can be relied upon to easily make the diagnosis. Moreover, many FM sufferers have other conditions that overshadow FM signs and symptoms that often become the focus of her (or his) doctor.

Back in the early 1990s, the American College of Rheumatology reported “a system” for diagnosing FM. This consisted of a physical examination approach where a certain amount of pressure applied to at least 11 of 18 “tender points” had to be present. This was initially received with enthusiasm, as previously FM was a diagnosis made almost entirely on “gut instinct.” However, it soon became apparent that it was not so easy to interpret the patient’s response when these tender points were tested. Today, for a diagnosis to be made, there are three specific findings that are considered: 1) Wide spread muscle pain (in all four quadrants); 2) Pain that has been present for at least three months; and, 3) at least 11 of the 18 tender points are found – LESS emphasis is placed on the latter. The Fibromyalgia Pain Assessment Tool is a questionnaire filled out by the patient that can also help lead to the diagnosis of FM. Assessing the FM patient for other complaints or conditions commonly associated with FM include the following (% prevalence is reported by fibrocenter.com): 1) Irritable bowel syndrome (32-80%); 2) Temporomandibular disorder (TMD) (75%); 3) Chronic fatigue syndrome – sometimes to the point where bed rest is mandatory (21-80%); 4) Tension or migraine headaches (10-80%); 5) Multiple chemical toxicities; (35-55%); 6) Interstitial cystitis (21%) which includes  eight months of bladder pain, urinary urgency, and frequency (more eight times a day and two times a night); 7) Restless leg syndrome (32%); and 8) Numbness, especially the hands and/or feet (44%). Other common complaints include sleep interference, which prevents deep sleep to be reached, depression or anxiety, concentration and/or memory problems, and more!

As chiropractors, we are trained to assess the FM patient, establish the diagnosis, and offer management strategies such as spinal manipulation, massage, exercise training, nutritional counciling, modalities, and more, which can significantly improve the quality of life of the FM patient. To achieve the best outcome, you may require the services of other types of healthcare providers, as the importance of co-management cannot be overemphasized!

If you, a friend or family member requires care for Fibromyalgia, we sincerely appreciate the trust and confidence shown by choosing our services!